Practicing Shooting With a .22

Practice is expensive. It’s as simple as that. Unless you planted an ammo tree in your back yard, you’re probably spending around a quarter every time you pull the trigger on your pistol and even more for the rifle. Of course, dry-fire practice doesn’t cost anything and is a great way to get extremely proficient at draws, reloads, and other kinds of manipulations, but at some point you’re going to have to put some rounds down range to verify that what you think you’re seeing with your sights during dry fire is what’s actually going on.

This is where the good ol’ .22 can come into play. As a budget alternative to practice with a full-power center-fire caliber, the .22 can be a great way to do your live-fire practice as long as you understand both the advantages and the limitations.

Advantages to Practicing with .22

Besides being cheap to shoot, one of the biggest advantages of practicing with a .22 is that you can safely shoot steel at close ranges. This is especially true when it comes to the rifle. Generally speaking, safe distance for rifle steel is 100-yards, so being able to shoot rifle steel at 10 yards is great.

I generally shoot static or self-setting steel when I’m practicing with a .22 because it gives me instant feedback on my sight alignment and trigger control, and I don’t have to walk down range to tape or reset. Less time resetting means more time shooting.

Being able to shoot steel very close also means that you don’t need a big range to practice. Instead of finding a place where you can stretch your .223 out to 400 yards or farther, you can just put tiny targets at 50 yards and shoot them with rimfire ammo. It will require the same level of stability in your shooting position and the same level of consistency in your trigger press, but you can do it at your local pistol club.

Limitations to Practicing with .22

The main drawback to using a .22 for practice is that there is very little recoil. I know we all like to talk about how our competition AR rifles recoil like a .22, but when it really comes down to it, there is still a difference. It’s very easy to get sloppy with your rifle stance and your pistol grip if you put too much stock into your rimfire practice, so it’s important that you don’t get lazy with the fundamentals.

Because of the reduced recoil, you’re going to be able to hold your sights on target for follow up shots much easier than you would with a center-fire caliber, especially with the pistol. For this reason, practicing things like Bill Drills (6 shots on the same target) may actually do you more harm than good and engrain bad habits.

Instead, practice drills that only require one shot per target. Things like position entry and exit, shooting on the move, and unconventional rifle positions will all be the same regardless of the recoil, so that’s where you want to spend the bulk of your time when it comes to rimfire practice. 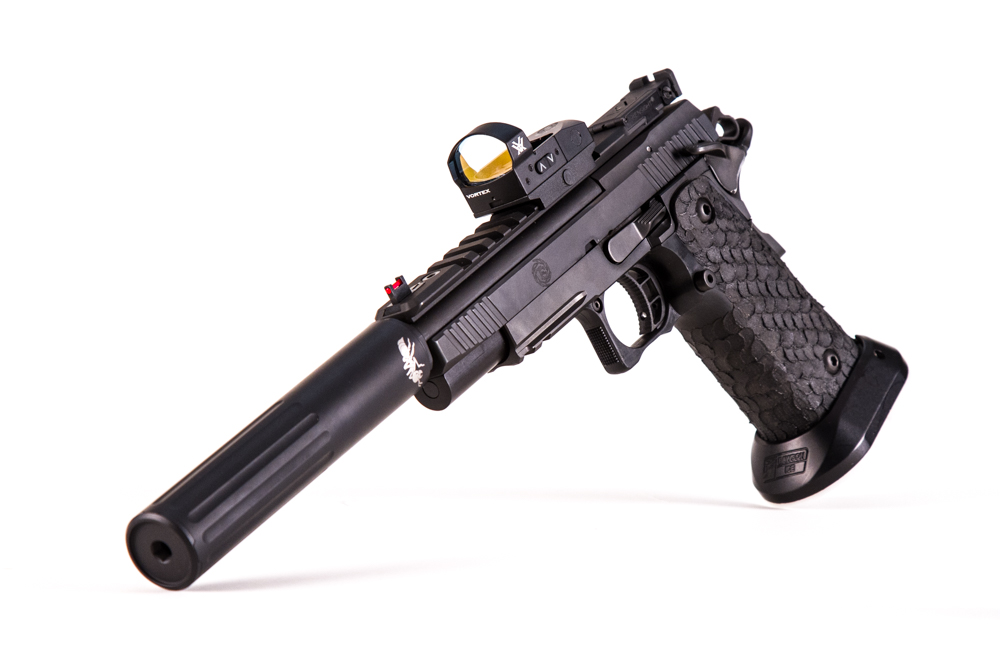 There are two ways to go when it comes to platform choices. You can either use the .22 that’s already in the safe, or you can get a dedicated .22 upper for your competition lower—whether it’s the rifle or the pistol.

Most people will go with the first option. Even if you’re shooting you’re the Ruger 10/22 and Mark III you have from when you were a kid, it’s still going to be valuable. You’re still aligning sights and you’re still exercising good trigger control in order to get hits.

A .22 that mimics your competition platform a bit more is going to be slightly better. For example, the Smith and Wesson M&P15-22 has the same dimensions and fire control as a regular AR15 and a great choice for not too much money.

Even better is a dedicated .22 upper that fits on your competition lower. For my rifle, I use a JP Enterprises JP22-R upper and put it on the same lower that I shoot in competition. The weight and length are the same as my .223 upper, so everything feels exactly the same when I’m moving the rifle around. Plus, the trigger, grip, and stock remain unchanged between practice and competition.

For my pistol I went with the Tactical Solutions 2211 conversion, which fits on my STI DVC 3 Gun grip. Just like the conversion for my rifle, this setup allows me to have the same weight and feel, the same grip, and the same trigger that I’ll be using in competition.

Whatever you do, I highly recommend against getting chamber-insert .22 conversion for your competition upper. There’s no faster way to ruin a really nice match-grade barrel than shooting a bunch of unjacketed lead bullets through it.

I use a suppressor for all of my .22 practice, and I do it for a few reasons. I don’t have to wear ear protection, which allows me to talk more easily with my practice partner (who’s usually also shooting a suppressed .22). It let’s me hear the bullets impacting steel very easily, so I’m never second-guessing whether or not I hit something. And finally, it’s fun. The more fun I can make my practice, the more likely I am to head to the range and put in the time.

A final consideration is that you need to shoot your regular competition guns every once in a while to make sure that you’re exercising the fundamentals when you’re shooting your .22 conversions. If you’re not gripping the pistol correctly or don’t have a proper stance with your rifle, then shooting full-power ammo will let you know in a hurry. As a general rule, the closer I get to a match, the more I tend to gravitate toward my competition guns for practice.

AMTAC builds suppressors with the mission in mind—a rock-solid return to zero, minimal POI shift, and the most innovative designs on the market.

Are Trusts Still The Best Option

There was a lot of uproar in the suppressor industry about the adoption of Rule 41F. Some people saw it as no big deal. Others saw it as the end of gun trusts. But what has really changed? Are trusts still the best options for purchasing NFA-regulated items like suppressors, SBRs, and full-auto firearms? Trusts…

What The Numbers Mean

Without getting too far into the weeds on a very complicated subject, we’ll try to talk briefly about dB ratings. Suppressors are rated by their decibel reduction (intensity), which is different than perceived sound (loudness). While these two factors are related, they are not the same thing, and they are not proportional. When intensity increases…

One of the most common questions we get here at the shop is if you can use a .30 caliber suppressor on a .223 rifle. The short answer is… yes. So, if you can, then why wouldn’t you just buy a .30 suppressor and be done with it? Why do .223 suppressors even exist? There…

Suppressors give hot gases a place to expand and cool. As a result, the suppressors themselves tend to get very hot. If you’re shooting at a high rate or on full auto, it doesn’t take a whole lot to make your suppressor too hot to touch or put back into your range bag. So, now…